Party Tips from an Event DJ: Don’t Treat You’re DJ like an iPod 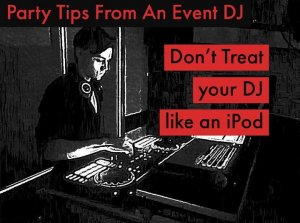 This is likely very high on, if not at the top of every single DJs list of pet peeves.
Its Important to understand that every DJ who takes themselves seriously has spent months, years, even decades mastering their craft. They’ve meticulously honed the skill of reading a crowd and figuring out what music works and what doesn’t with any given group of people. They’ve developed the art of taking a crowd on a musical journey and finding flow in the tracks they choose to drop. Not to mention the time and energy spent on perfecting their mixing skills.
So when someone comes along and treats them like an iPod i.e. telling them to skip to the next song, demanding they play their song next, etc… It’s not ju
st rude, It’s deeply insulting.
That being said, we’re not saying you shouldn’t make requests and ask your DJ to customize their setlist to suit your musical tastes. That’s all part of the craft and most DJs will be happy to accommodate you.
But understand what a request is…A REQUEST. Being demanding and entitled will only piss off your DJ, make them never want to work with you again, and put and damper on your party.
If all you want to hear all night is your playlist and nothing else then don’t bother hiring a DJ. You’d be better off and save a lot of money renting some
speakers and putting your iPod on shuffle.
scsadmin2021-11-10T20:00:13-07:00November 10th, 2021|